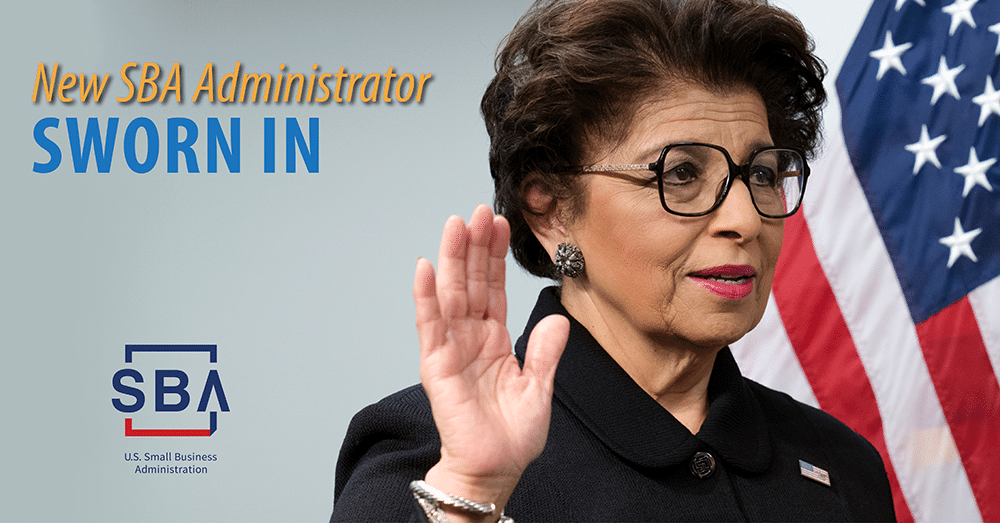 “I want to thank the President for his confidence in me to be an advocate in the Cabinet for our country’s 30 million small businesses, and I want to express my sincere gratitude to the U.S. Senate for confirming me in a bipartisan fashion,” Administrator Carranza said. “I look forward to helping elevate female entrepreneurs and our military veterans, expanding access to SBA resources among entrepreneurs in disadvantaged communities, and continuing to prioritize disaster relief.”

“I would like to thank former Administrator Linda McMahon for her leadership at the SBA, and the dedicated professionals at the Agency during this transition,” said Administrator Carranza.

Administrator Carranza’s experience includes a remarkable 30-year career with United Parcel Service, where she began as an hourly dock worker, rose to oversee operations in Latin America and the Caribbean, and ultimately retired as the highest-ranking Latina in the company’s history.

on December 11, 2019, before the U.S. Senate Committee on Small Business and Entrepreneurship, Administrator Carranza discussed her hands-on experience in the private sector, public service and the life-changing potential of entrepreneurship:

“Throughout my life – as a young girl in a working-class community, as an executive leader at a global company, and as a government official – I’ve seen the transformative power entrepreneurship can have on individuals, communities, and the global economy.”

Administrator Carranza pledged to preside over an Agency focused on creating more opportunities for women and historically underrepresented entrepreneurs while ensuring the SBA remains prepared to assist displaced homeowners and small businesses impacted by disaster:

“Members of this Committee, whatever success I achieved in life has been a function of not only hard work, but also opportunity, guidance and advocacy I received from others.

… I will leverage the power of this agency to continue to provide the same kind of support that I received, to entrepreneurs who need it most. I intend to put particular emphasis on opening more doors for women and for entrepreneurs in underserved communities, including military families and veterans. And I intend to prioritize disaster preparedness.”

Administrator Carranza earned her MBA from the University of Miami in Coral Gables, Florida, and received executive, governance, management and financial training at the INSEAD Business School in Paris, France; Michigan State University; and the University of Chicago.

About the U.S. Small Business Administration

The U.S. Small Business Administration makes the American dream of business ownership a reality. As the only go-to resource and voice for small businesses backed by the strength of the federal government, the SBA empowers entrepreneurs and small business owners with the resources and support they need to start, grow or expand their businesses, or recover from a declared disaster. It delivers services through an extensive network of SBA field offices and partnerships with public and private organizations. To learn more, visit www.sba.gov.­