In a state dominated by fossil fuels, a Fremont County start-up hopes to carve out a market niche for solar energy.

Fenton Energy provides solar power systems for agricultural, commercial, and residential customers. “Anything that needs to be electrified, we can put electricity to do it,” said Jim Fenton, a co-owner of the company. 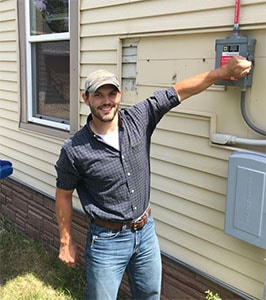 After graduated from Wind River High School in 2009, Jim tried his hand at several things, before deciding to attend Solar Energy International, a renewal energy training school in Paonia, Colo. He and his father John started Fenton Energy in 2016.

The cost of solar technology has dropped dramatically in recent years. The International Renewable Energy Agency says that solar PV module prices fell by about 80 percent between 2009 and 2016, and prices could fall another 59 percent by 2025, thanks to economies of scale and improved performance and efficiency.

“It’s an amazing technology,” Jim said. “How electricity is produced is the whole end-game now, and I feel I can make a very good stance for solar energy.”

Fenton Energy does both “grid-tied” and “off-grid” systems. Grid-tied means electrical generation is semi-autonomous, but still connected to a local utility company. Off-grid systems are not connected.

Grid-tied systems might be appropriate for homes, businesses, or ranches and can lower electrical bills significantly. Off-grid applications might be used for remote cabins, recreational vehicles, or agricultural water pumps.

Before launching Fenton Energy in February 2016, Jim contacted the Wyoming Small Business Development Center Network and Sarah Hamlin, the SBDC’s business advisor in Riverton. She conducted a thorough review of the company’s business plan and helped with such things as financial projections and marketing strategies. “She helped me make my business plan very refined and professional,” Jim said. “It was really a help to talk to someone else who was business oriented, and had nothing to do with what I do.” 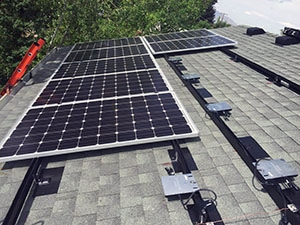 In Wyoming, Jim said solar faces some regulatory headwinds. For example, he can’t build systems larger than 25 kilowatts in capacity size. At the same time, Walmart Corp. has announced plans eventually to use 100 percent renewable sources of energy. Jim noted that the Riverton Walmart store alone could probably use a 700-kilowatt system – far larger than he is currently allowed to install.

Even so, Jim is optimistic about the future of solar energy in the state. By the end of 2016, he had lined up a solar agricultural system, a commercial system, and several residential projects. He hoped to keep a crew of four workers busy throughout the spring and summer of 2017.

Rather than using a cookie-cutter approach, Jim custom designs his systems to specific sites. The time between completing a deal and the start of construction is usually about six weeks.

The Powder River Basin Resource Council, a nonprofit conservation organization based in Sheridan, hired Fenton Energy to repair and upgrade a roof-top solar system on its office building. “Given the price of solar systems now, it just made sense to get our existing system running, but also expanded,” said Shannon Anderson, the group’s acting director.

She added that the solar panels generate about half the electricity used by the office. It is a net-metered system that also uses grid power from Montana-Dakota Utilities. “A lot of people don’t think of Wyoming as a good solar spot given our cold winters,” she said, but that not accurate. On average, Sheridan has over 200 days of sunshine per year. “Being the organization we are, it also sends the message that we put our money where our mouth is, and we support this kind of renewable energy and the businesses and workers that do this for a living,” Shannon said. 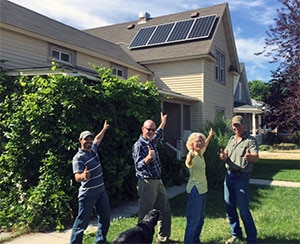