POWELL – When the owners of Gestalt Studios at the Polar Plant in Powell began planning their new business, they envisioned an enterprise that would be greater than the sum of its varied parts. 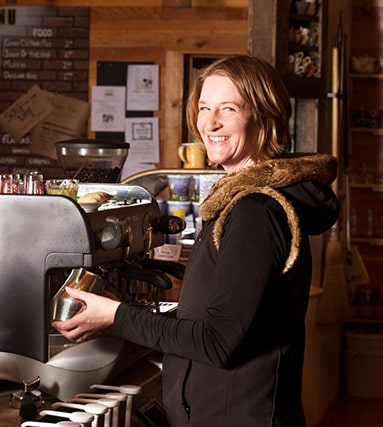 So they created an art supply store and gallery inside a former meat-packing and cold-storage plant, a place where friends also can chat over a cup of coffee and sandwiches, or sample tasty Southern-style pastries known as “hand pies.”

And as a bonus, on Wednesdays through Fridays, it’s also a place where customers can purchase ribs, burgers, and other meats prepared in the Gestalt Studios commercial smoker. (Photo courtesy of Schyler Allen.)

Erin Johnson, who owns the business with her husband Dave, said the idea for an artists’ haven originated with their daughter Kellyn. 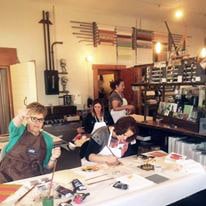 “She came up with the name before we bought the building,” Erin said. “It was a dream of hers since high school to have a communal studio-type space for artists to gather.”

The Johnsons added a coffee room to their renovation plans for the 5,000-square-foot, 1940s-era building. While the exterior did not change, the interior was completely transformed.

“It still looks like a processing plant outside, but when you walk in, it’s like a magical little space with lots of art, wood, and antiques,” Erin said.

Among other features, the store includes fold-out, Murphy-style desks complete with storage space that artists can rent.

Eventually, an apartment also may be added to a 1,200-square-foot area at the rear of the building. 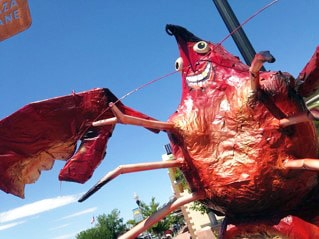 Also, the Johnsons purchased an adjacent parking lot where they plan to build a community “green space” – an outdoor area with trees, gardens, and a gazebo where artists can work.

Before launching the venture, the Johnsons turned to the Wyoming Small Business Development Center Network for help refining their business plan.

“We didn’t need it for the bank per se because they were already on board,” Erin said, but she wanted to ensure that the plan made sense and that it covered all the bases. 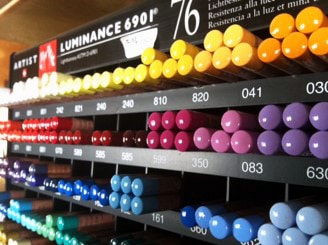 “I’m a former banker myself so when I do these, I can put my banker’s hat back on,” he said, asking questions a lender might ask and suggesting changes as needed.

Gestalt theory as applied to artistic endeavors involves achieving the proper balance between unity and variety. In commerce, the Johnsons seem to have struck a similar balance, as reflected in the community’s response to the new business.

Gregory Jones, a local painter and owner of Grizzly Photographics in Powell, held a show at Gestalt Studios last spring featuring his photos, paintings, and drawings.

“They did a fantastic job of putting the presentation together for the opening night,” he said, and his artwork displayed for several weeks. In the end, he sold many of the pieces on exhibit.

Gregory said he particularly appreciates the large selection of art supplies handled by Gestalt Studios, including many items that were not locally available before. The staff also has the expertise to show customers how to use such materials.

“I’m tickled to have such a fun place five blocks from my house,” he said.